In the 4th session of the Leader in Training program, the LITs learned how to support the activity leader during the stream hike for the upcoming Summer Camp. While at camp, they will be given the important role of explaining the safety measures to the younger campers before prior to the stream hike.
After being divided into teams, they discussed and practiced how to properly convey the important points to others before giving a presentation in front of the whole group. Afterwards, everyone geared up in their swimsuits, helmets, boots, and life jackets, then headed to the stream. They warmed up on the bank of the stream before fearlessly tackling a 5-meter cliff! The six LITs enjoyed jumping from the cliff numerous times and playing in the stream for the rest of the morning.
The group then headed back to the lodge, where they made hotdogs for lunch on the rooftop.
They were unable to contain their excitement when they saw the gas stoves that they will be using for their own two-day-one-night expedition in March. Their fire-building skills improved as they helped themselves to seconds and ate their fill of hotdogs!
In the afternoon, the LITs practiced camp songs then started making plans for the March expedition. They each had to discuss the tasks that they will be in charge of during the expedition, which was determined in the previous session. It was evident from their expression that they are taking their responsibilities seriously.

Through this year-long program, Mirai no Mori will work together with the LITs to achieve greater growth. We thank you all for your continued support! 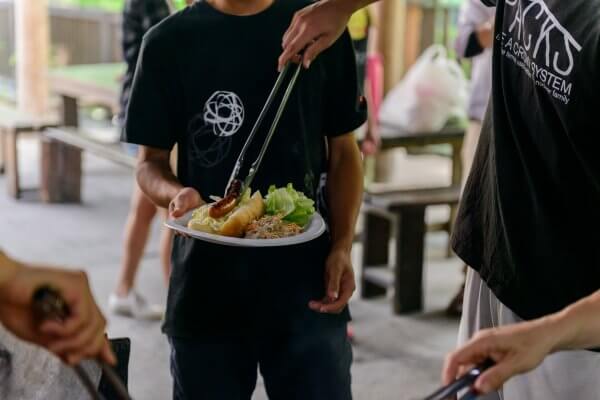