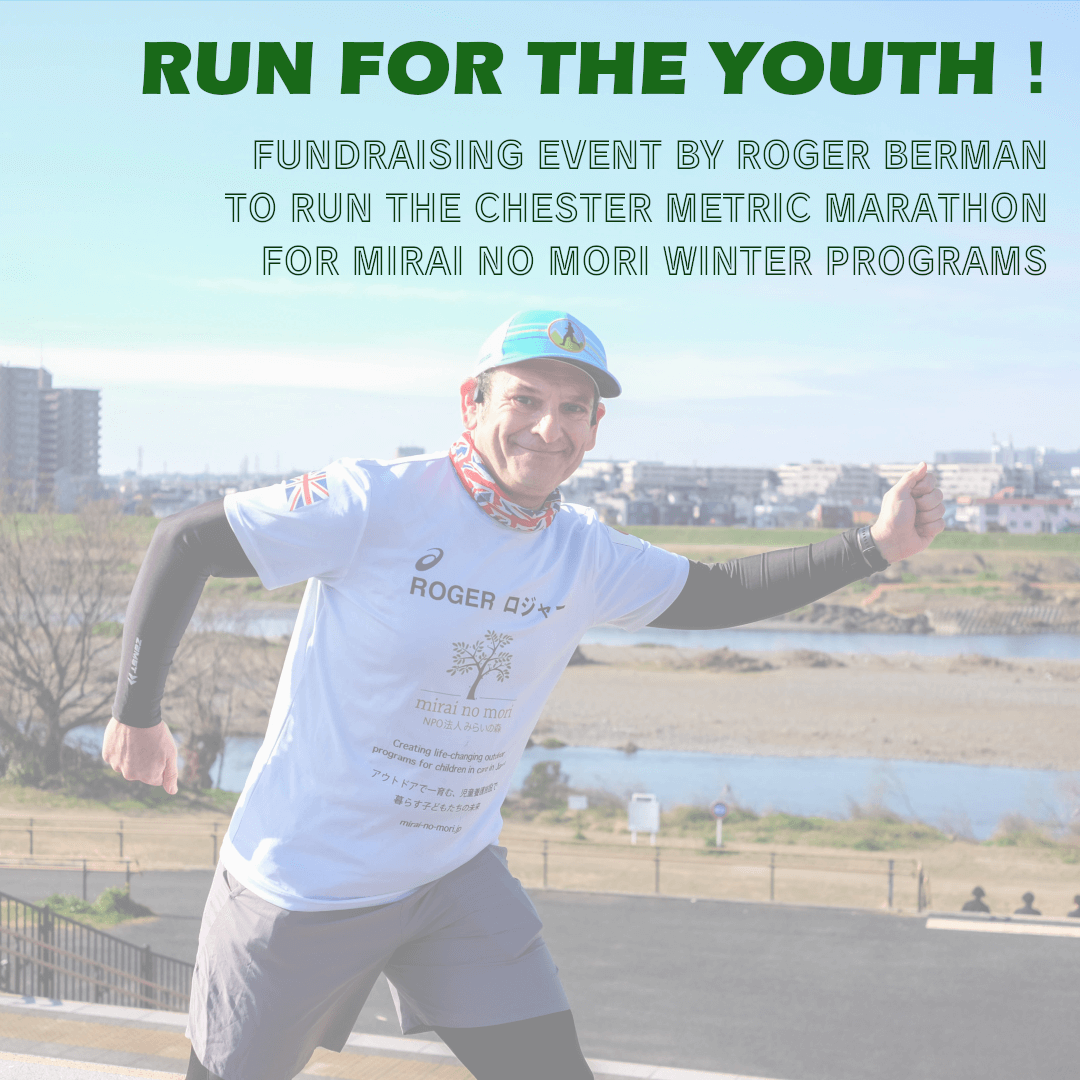 Mirai no Mori is very pleased to have the support of Roger Berman who is the founder of Tokyo-based ZenWorks and is an active supporter of Mirai no Mori.

In the past, Roger has supported Mirai no Mori alongside fundraising group the Knights in White Lycra, as well as individually by running a marathon along the Tama River which raised 127,000 JPY in 2020.

He believes that running a marathon is an effective way to build awareness and publicity for charitable causes within local communities. This year on October 2nd, Roger will run the 2022 Chester Metric Marathon (26.6km) in the UK to raise funds and public awareness for the marginalized youth in Japan, as well as to help fund for Mirai no Mori’s winter programs.

▼ About Roger Berman and his support for Mirai no Mori

Roger is from Liverpool in the northwest of England and has lived in Japan for 37 years. He runs a brand licensing and consulting firm in Japan. In addition to his work, he is also focusing on activities as a “social issue runner”. He has been a long time supporter of Mirai no Mori because being originally from England, the concepts of “camping” and “nature” really resonates with him, and his values ​​for nature are in line with Mirai no Mori’s vision, thus he made Mirai no Mori a part of his business’ CSR (Corporate Social Responsibility).

“The distance is a challenge on its own, but it’s nothing in comparison to the challenges kids in care have to go through,” says Roger in an interview that we had with him.

Previously, Roger ran a charity run for Mirai no Mori at the 2019 London Marathon, which was featured in News Digest UK (a newspaper for Japanese people living in the UK). (See article: http://www.news-digest.co.uk/news/features/18923-roger-berman-runs-for-a-japanese-charity.html)

In 2020, Roger also ran a full marathon in place of the canceled 2020 Tokyo Marathon on the Tama River cycling course to support the Mirai no Mori summer camp. (See link in Japanese: https://readyfor.jp/projects/roger-tokyo-marathon-2020/announcements/126432)

And on October 2nd this year, he will be running the Chester Metric Marathon 2022 in the UK for charity!

▼Prospect and vision for the project

“Through this project, we would like to make it possible for the children in children care homes to experience the winter program, but also for the Japanese people to know more about the existence and activities of Mirai no Mori, as well as the charity itself. Furthermore, I would like other runners to know that running is a way to contribute to society! ”, he said, saying that it is the first step to bring about the way Japanese society could engage with these important social issues in the future.

In addition, through this project, we hope that the children in the care homes will be given courage and gain the strength to spread their wings in integrating with society together with Mirai no Mori.

All of your support will be donated to Mirai no Mori to cover the costs to hold this year’s winter programs for children living in care homes.

This time, we are using a crowdfunding site called Global Giving and direct donations to Mirai no Mori, and we have set a target amount of 200,000 yen.

If you would like to donate in yen, please click the link below to donate directly to Mirai no Mori!

If you would like to donate in US dollars, please use the English crowdfunding site, Global Giving!