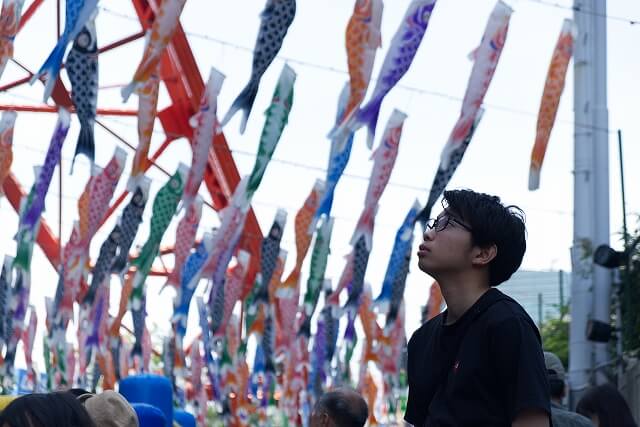 Currently, 27,000 children live in care homes, where they face various obstacles, including after effects of trauma and economic and emotional isolation after leaving the care homes.

In order to inform as many people as possible about this situation, Mirai no Mori Ambassador Matt and Mirai no Mori program graduate, Tomoya formed a team. This documentary film is about the challenges faced by children in care homes.

Eleven-year-old Tomoya lived with his grandparents in Fukushima Prefecture. His grandmother went missing after the massive tsunami caused by the Great East Japan Earthquake of March 11, 2011, which engulfed his hometown and home. He was then taken in by his mother, whom he had seen only a few times, but was neglected and abused. Hence, he was placed in a care home. This is a documentary film in which Tomoya tells in his own words about the safe life he found in the care home  with children in the same situation. He encountered Mirai no Mori and faced various challenges after leaving the facility. The camera turned by director Matt Miller becomes Tomoya’s own eyes, showing his life in care homes and his path of regaining his “life skills” in the great outdoors with his fellow children  in three parts: game, picture book and reality. 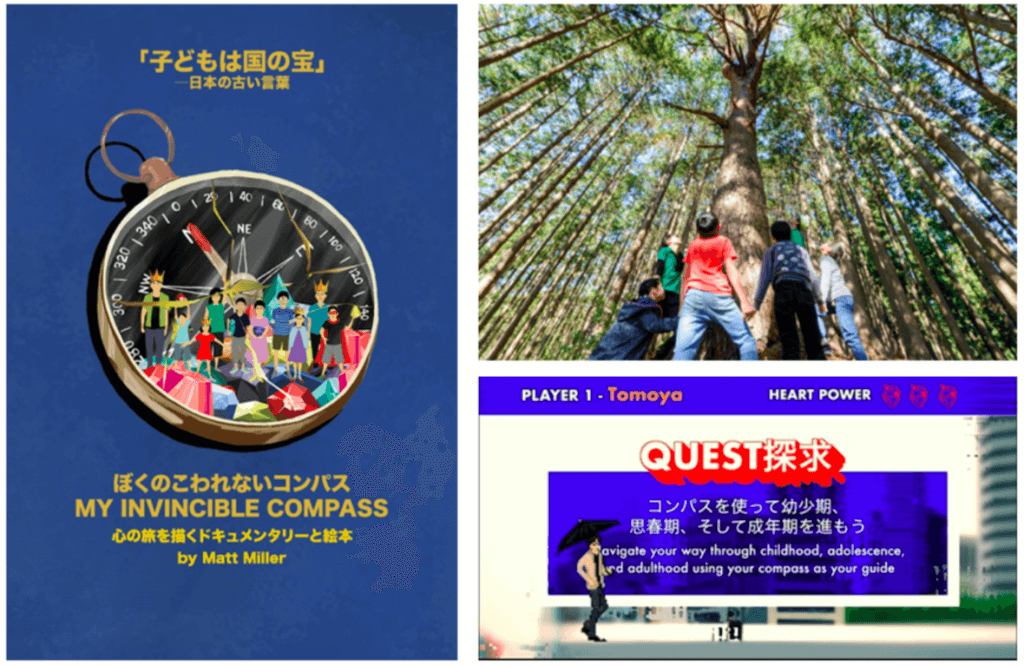 We found it very interesting and elaborate that the film had three formats: video game, fairy tale story, and reality. Please tell us why.

→I believe that the future is for children, so I wanted to make a film for younger audiences including children in care homes in an approachable and imaginative way that deals with the difficult subject such as  childhood trauma. I was convinced that this mixture of video  games, a  fairy tale story, and reality was sure to win the hearts of children, and in fact when I actually spoke to children who had seen the film, their favorite part was the game scene. I believe that the three formats will make children more engaged in this film.

Do you have any current plans for your future activity as a passionate activist to support children in care homes?

→1 Translate this book into several languages

These are the three projects we would like to promote through “My Invincible Compass”.  The purpose of this project is to raise awareness of childhood trauma among many people and to encourage them to think about what they should do to support children living in care homes.

Although we may face difficulties in fundraising, we believe that this project has the potential to help many young people, and we will do our utmost to complete it.

Which scene in the film do you want  people to pay special attention to?

→I don’t think I could pinpoint any one particular scene because there are a lot of scenes that are important.  But in the fairy tale, there is a line that says “your story matters, and it has always mattered.”  I want everyone who watches this film to realize that their story matters and that the world is better because they exist.

What were you conscious of when making the film?

→Since I was shooting one-on-one with Matt from time to time, I sometimes felt nervous and tense, but I tried to cheer myself up as much as possible and went into the shoot.

What made you decide to appear in this film?

→It was the hardest when I left the care homes at the age of 18 and suddenly had to live alone.I thought it would be good if I could share with  many people that not only I but also many like myself are going through such hardships. When Matt told me about this offer, I wanted to help him with the hope that more people would understand about my own experience.

Did anything change in you or the reaction of the people around you before and after the film?

→When I was in a care home, I had a dream of becoming a child care worker at children’s home,  kindergarten or nursery school. However, after filming and being interviewed, I have become aware that I would like to work in an environment where I can interact closely with children and help them, not just as a child care worker. I would like to do something that I can be involved broadly and deeply, without being limited to just being a childcare worker.

Comments from the audiences 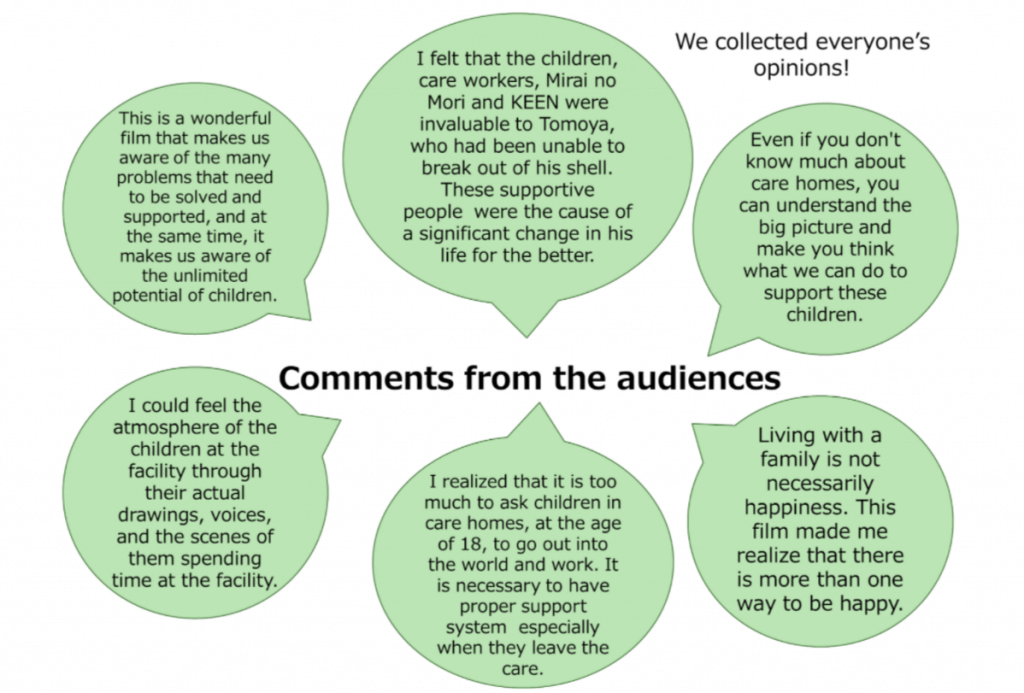 “I didn’t realize how hard it would be to live alone. I didn’t think it would be so lonely. I felt like I was being crushed by so many things.”

These were Tomoya’s words when he left the care home and began living alone. As can be seen from the chart, less than half of the children responded that they are confident in their ability to leave the care and support themselves. Not only do they face financial problems, but they may also struggle with emotional isolation due to the significant change in their environment after leaving the care. For example, there might not be no one to rely on, you have to take action yourself to get help, and the atmosphere in the workplace is not conducive.

Mirai no Mori programs are designed to provide the skills and knowledge that the children need to be able to choose and create their own path for the future. Through new experiences and overcoming many challenges, children discover new possibilities for themselves, leading to self-actualization and a flourishing future.

In the film, Tomoya says that “the relationships I built at Mirai no Mori gave me the opportunity to confide the pain in my heart.” As the table shows, many children living in care homes have painful pasts. Some children do not open up to others because of their past experiences and retreat into their own shells. For these children, as Tomoya’s words indicate, programs at Mirai no Mori are a place to build trusting relationships. The blog on the Mirai no Mori website describes past activities in detail for each program, so be sure to check it out!

What we can do

→Mirai no Mori accepts monthly donations starting at 1,000 yen. Even if you are unable to directly participate in our programs, you can still provide long-term support to children in care homes by becoming a Monthly Supporter. For more information, please visit this page.

→Mirai no Mori is currently selling two types of charity T-shirt with KEEN.

You can purchase them at KEEN’s online store. The sale of these charity T-shirts will be donated to the program.

(For each T-shirt purchased, all proceeds from the sale price, minus production costs, will be donated to Mirai no Mori to be used for the program.)

→By following us on SNS, you will be able to know the current situation of Mirai-no-Mori. You can also see the introduction of each program and the voices of the participants!

→Volunteers are always needed at care homes where children, who cannot live with their parents for various reasons, live.

Mirai no Mori is looking for a variety of volunteers, including “Fundraising Event Coordinators” to plan events and “Camper T-shirt Designers” to design T-shirts for children to wear at camp.

Thank you for taking the time to read this.

We hope that many more people will see “My Invincible Compass” through this blog, and that as many people as possible will take action for children in care homes!