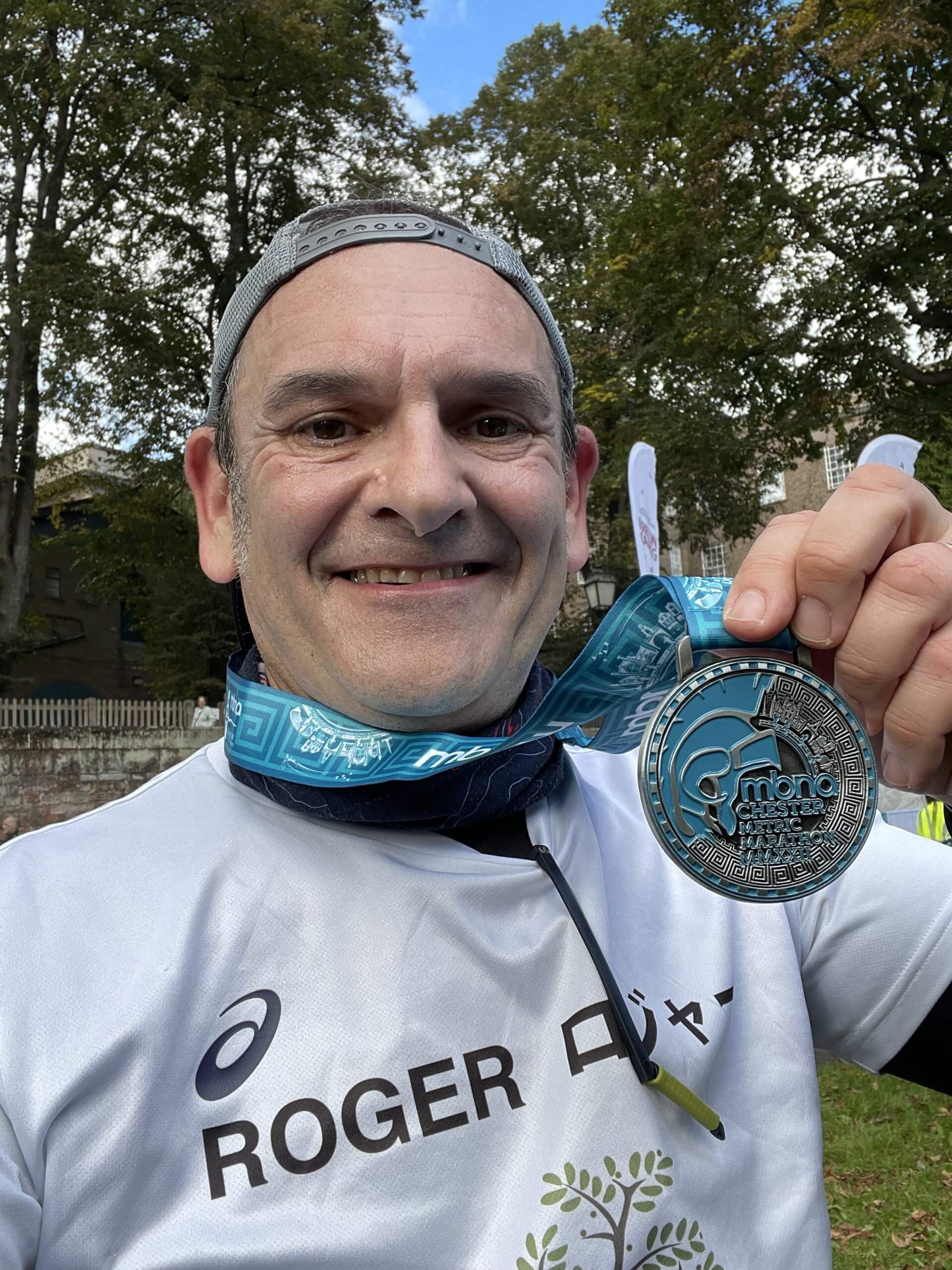 On Sunday, October 2nd 2022, Roger Berman completed the 26.2 km Chester Metric Marathon! Following his 2019 London Marathon effort for Mirai no Mori, this is the second time that he has challenged himself to do charity crowdfunding. This time he is doing the crowdfunding in order to give children living in care homes in Japan the opportunity to gain essential life skills at Mirai no Mori’s winter program. Roger ran the Metric Marathon in just under 4 hours – 3:59:07 to be exact. The goal of the crowdfunding was 200,000 yen (approximately 1387 USD) and thanks to all of your generous support both through Global Giving and direct donations to Mirai no Mori, we were able to collect a grand total of 220,843 yen (approximately 1524 USD) as of September 5th 2022 !

This charity run was a long time coming as Roger was supposed to run the 2022 Tokyo Marathon, but was unable to due to an injury. So he was very excited to be able to participate and run the 2022 Chester Metric Marathon for Mirai no Mori!

Roger spent three months training for the Chester Metric Marathon. During that time, he used a 12 week training plan where he ran three times a week including a mix of easy runs, interval training, long runs, cross training and rest days every week to build strength into other muscle sets, especially the all-important core.

Generally Roger did all his run training outdoors, because why run inside when you can run in nature instead? Most of his running training was along the Nogawa River, a suburban river near his home in Tokyo that has plenty of nature, wild birds, big trees and clean air – all things dear to Mirai no Mori. The training progressively got longer as the marathon date approached. His last long run was 22 km, about three weeks before the marathon. From the last three weeks until the marathon day, he gradually shortened the distance to keep his legs fresh.

Roger’s primary motivations for this marathon were twofold. One was to raise awareness for Mirai no Mori among his family, friends, business network, and the wider communities he is associated with, and to embrace the enjoyment of doing it through participatory sports. The other was to appreciate and enjoy the fact that despite having turned 60 this year, he is in good health and can still run the distance.

For Roger, the biggest struggle while preparing to run for the marathon was mental, such as maintaining the motivation to stick to the training plan. Candidly with work and life, etc. Roger likes to maintain the training regimen as much as possible,and “checking the boxes” gives him a feeling of satisfaction.However, when he was unable to do a specific training session, he would get a bit worried about whether he could keep the gains he had built. In actual fact, it’s pretty hard to lose the gains unless he took a long break from training.

In the three weeks prior to the marathon, Roger did a lot of running, cycling, meeting friends, had a 40 year school class reunion, and topped everything with a week of business in London at a trade show. He operated on full throttle and maximum revs! So much so that about six days before the marathon, his body said “enough is enough” and it delivered to him some cold chills and felt generally lethargic. He thought he had caught the coronavirus but fortunately, the antigen test (done twice) was negative! He decided to listen to his body and rested until he felt better.

After a good quality sleep, which is as important to athletes as is being physically well-prepared through training, all the rest had paid off. Come Sunday, he was feeling good! His brother drove him to Chester early Sunday morning for the race.

Chester is in the north-west of England, where the weather is famously unpredictable. Despite the weather forecast showing rain one week before the marathon, luckily race day was “run-perfect” with no rain, partly sunny and cloudy and a temperature of about 14-15 degrees centigrade!

Roger’s elder brother acted as his “support crew” and unofficial photographer. Coincidentally, his second cousin and a Japanese acquaintance of his who lives in Derbyshire, were both doing the full marathon! The full marathon race began at 9 a.m. so he made sure to cheer them off as well before he ran his metric marathon at 10 a.m. 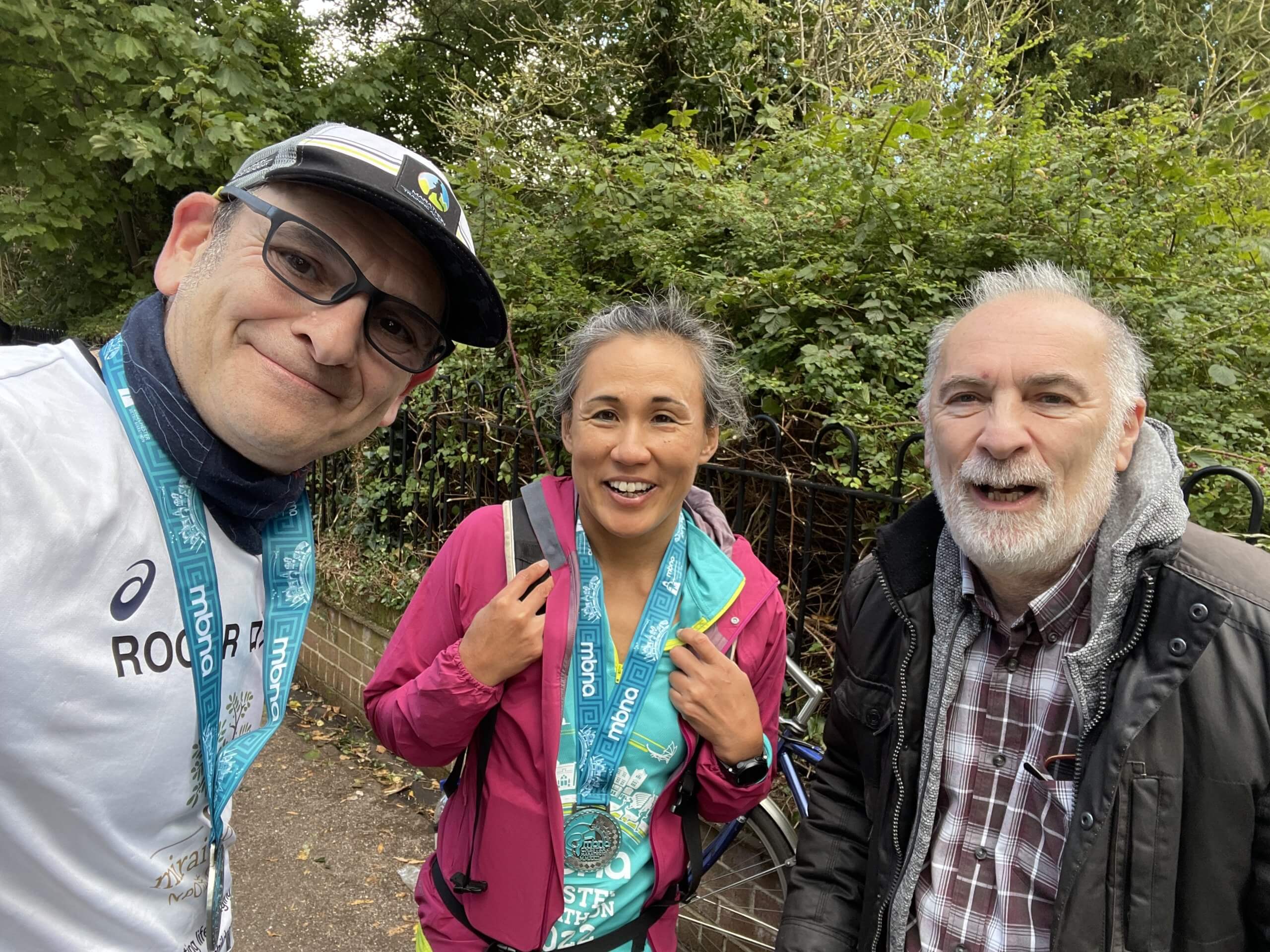 Once the marathon started, he felt so happy and excited. He loves the vibe of mass running events where everyone at the starting line has the same goal in place – to test themselves against the distance in whatever way they choose. Many runners in the UK do it for charity, some just try to run faster each time in search of a new personal best, or some may have physical or mental issues where running is a kind of therapy. For Roger as a slower runner, his goal is to “complete not compete” and to enjoy the camaraderie of other runners and the many volunteers and supporters on the course. 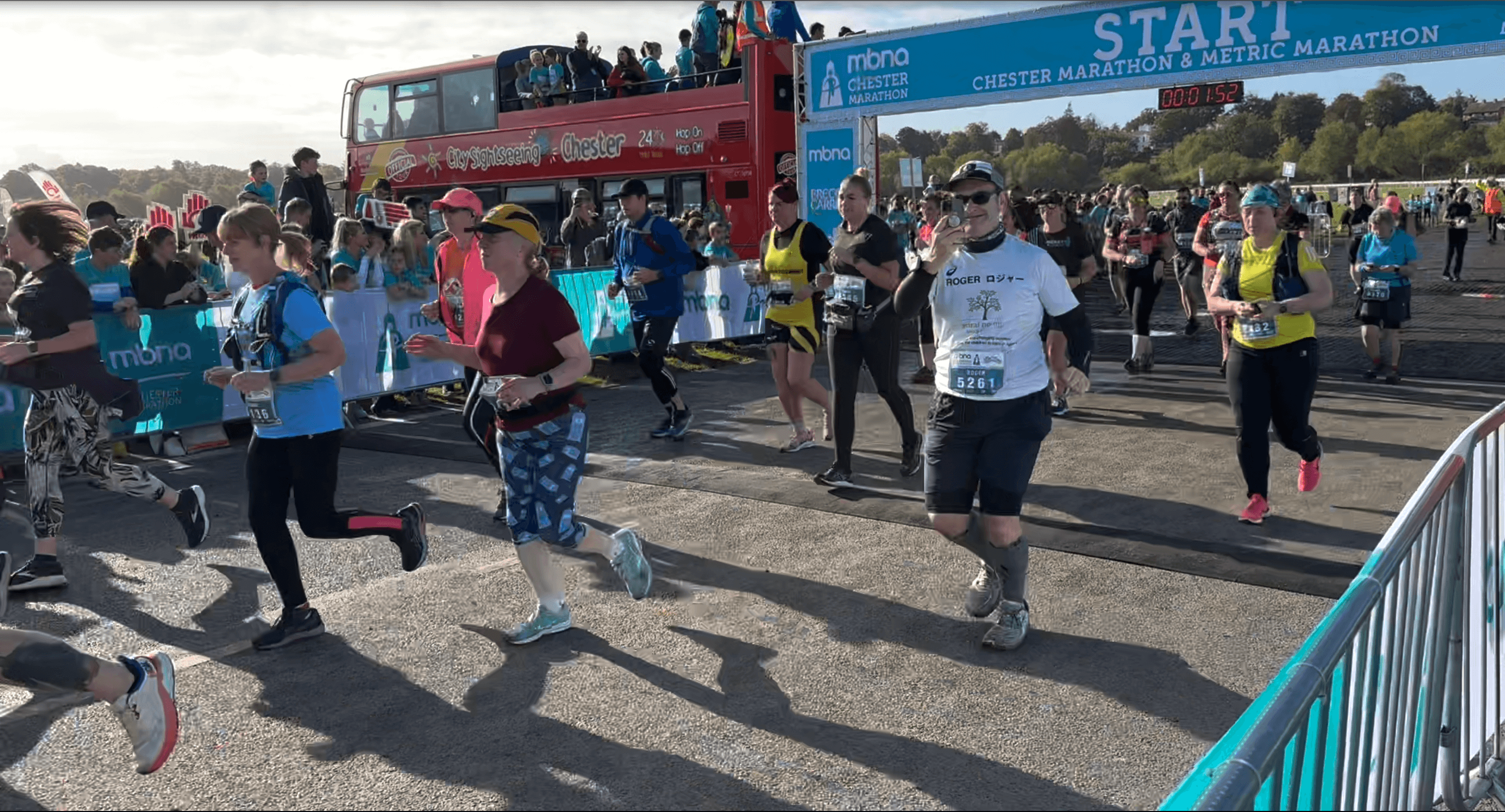 Thinking of the Children

Roger often thinks about kids in the care system in Japan and around the world not just during the marathon but also in his daily life. It pains him to think about the lack of chances kids get due to the circumstances of adults or the lives they did not choose to live. When so many kids are drawn a bad hand in life, he appreciates that he and his wife have the environment, circumstances and knowledge to raise their daughter in a loving and caring environment. As he was running and seeing the race supporters cheering the runners and volunteers giving up their Sunday to make sure the race went smoothly, it affirmed to him that people are mostly good and there is so much caring and goodwill out there. That reminded of all the people who are “cheerers” and “doers” in the Mirai no Mori ecosystem, and that gave Roger the strength to keep running this race to the finish. 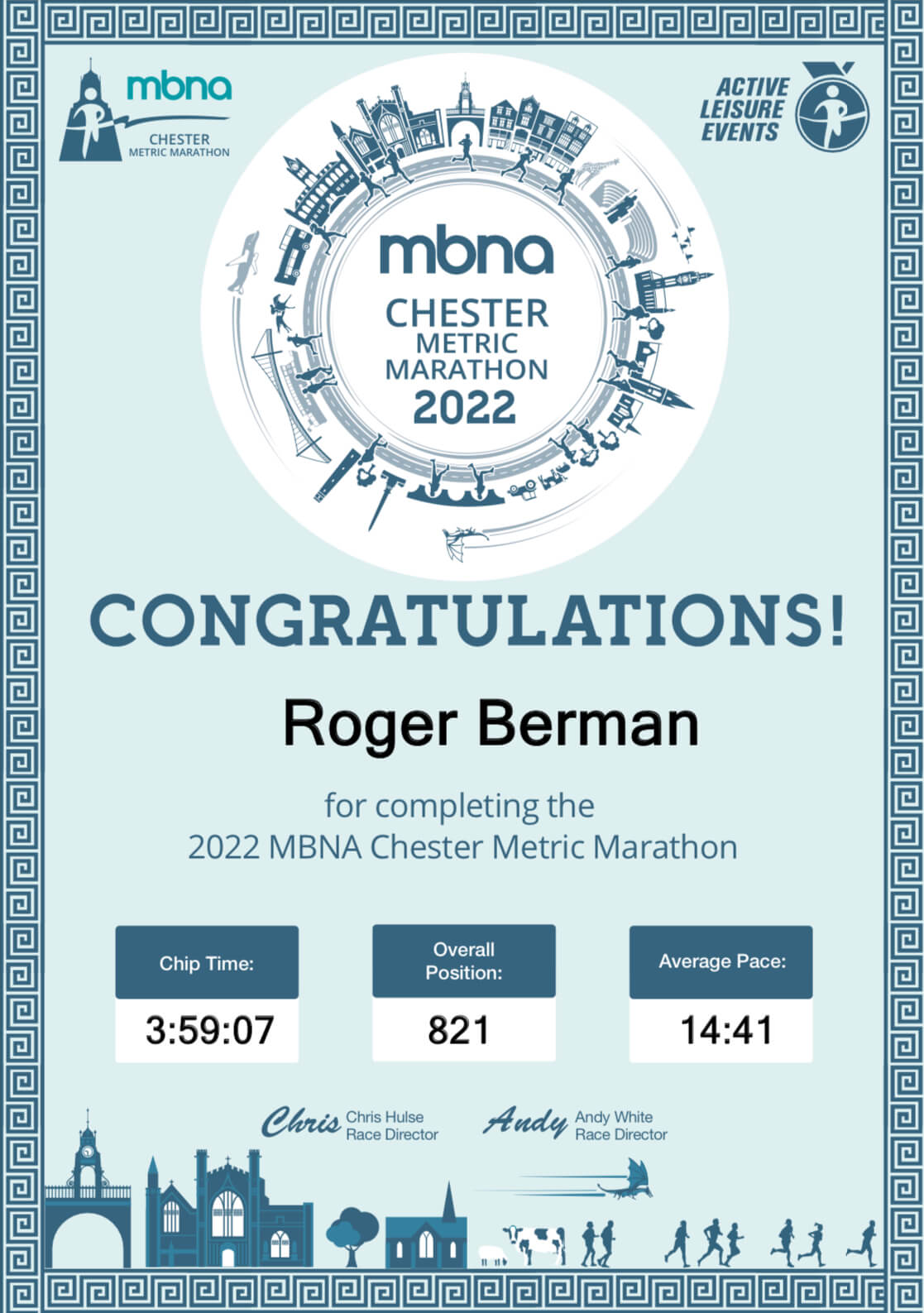 Roger finally crossed the finish line at 1:59 p.m! He was feeling very happy to finish before the clock struck 2 p.m.. He can now take a rest from marathon training for a while. He will need at least a week of recovery before  beginning to train for his next race, a half-marathon in December. When he first ran the Chester Metric Marathon in 2016 his record then was 3:28:49, this year, he finished the Chester Metric Marathon in 3:59:07. He’s a little older and a little heavier but he is still happy with his time. 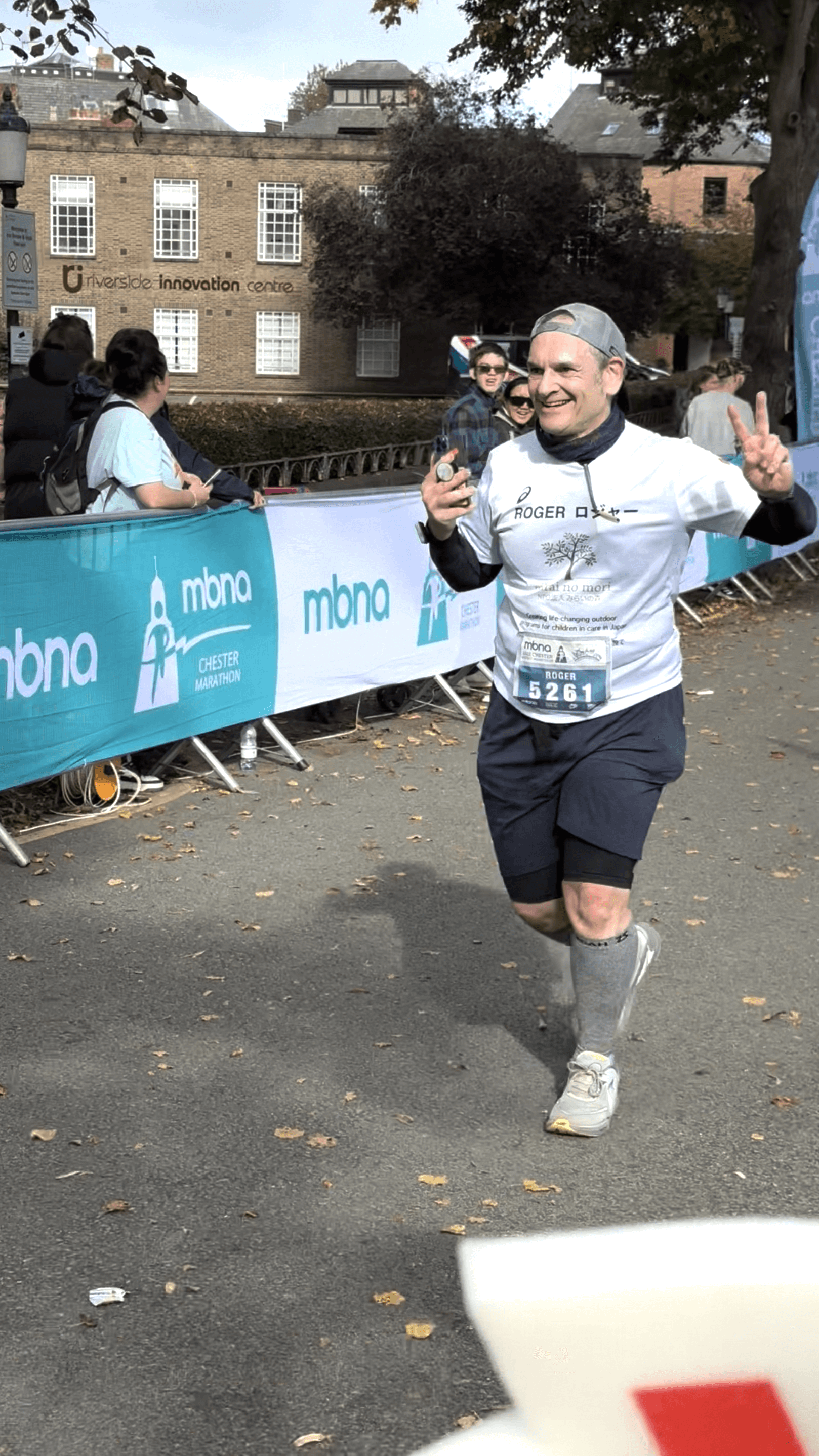 He said that the cheerers were amazing, and there were a lot of interesting things that he saw while he was running the marathon such as, one woman who dressed up as SpongeBob, a couple of school brass bands, and some guys standing in front of a village church graveyard doing their best Bob Dylan tribute songs.

Finally, Roger would like to say a few words to the donors who have supported him through this fundraiser;

“Firstly, thank you for your kind and heartwarming donations – whatever the amount – that support Mirai no Mori and its essential work in helping to take the “dis” out of disadvantaged kids’ lives in Japan. I am honestly humbled and honored when someone donates to Mirai no Mori through supporting my running activities.

Secondly, I hope my participation in sports charity events will inspire others to think about doing similar fundraising initiatives themselves, or at the very least, support people who do that.

I will continue to work for Mirai no Mori as long as my body and health allow!! “