Sun, 03 Dec 2017
Location: Sophia University campus
Date: November 15, 2017
Event:
Nonprofit leaders had the opportunity to speak out about poverty at a lecture held by Sophia University’s Global Competency Program. Mirai no Mori board member Sarajean Rossitto moderated the evening and Executive Director Kozue Oka was invited to speak. Other panelists were Miku Sano from Big Issue Japan (a social business that publishes high-quality magazines that are sold by homeless people) and Executive Director Ayumi Kato from Mayoi (an NPO that supports those living in poverty by assisting with housing and serving as a guarantor).
When asked about what poverty is, the audience generally assumed that it referred to homelessness. However, this issue is not limited to just homeless people–women, LGBT, and children also suffer from poverty. Kozue was given the chance to speak about the often overlooked children in care homes who often have higher chances of ending up in poverty after leaving the institution because they lack adequate support networks as they transition into adulthood.
We thank Sophia University for the opportunity to raise awareness about the issue and to share our mission! 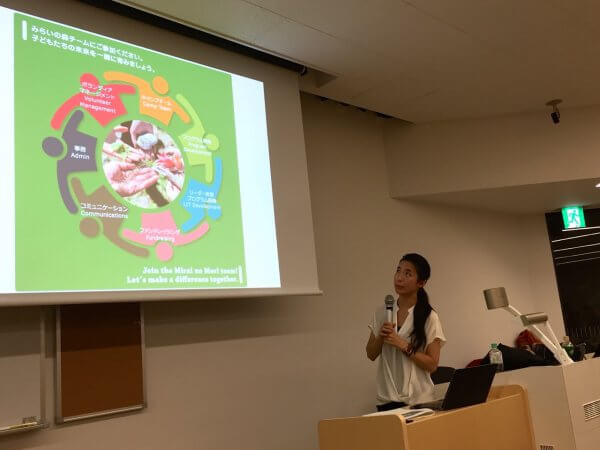