“I missed everyone at camp, and cried at night after coming back from camp. It was my first camp and I was really nervous, but I am glad that everyone was so kind to me. I will treasure my t-shirt with everyone’s signatures, and will be back next Summer!”

“After joining this year’s Summer Camp, I feel strongly that it is a place where children with emotional scars can experience healing. Being in nature and through outdoor activities, they learned to cheer on each other by shouting “You can do it!”, to support each other and to live together. I am happy to have met such a wonderful group of adults and children at Summer Camp: an important place for all. Thank you very much!”

“My name is Jane Yang and I am a university student from South Korea. I first served as a volunteer at Mirai no Mori’s winter camp in 2017, and participated in their summer camp for the third time this past summer. The following is a reflection on my most recent experience and why I support and believe in Mirai no Mori’s vision.

Mirai no Mori believes in empowering Japanese children from institutionalized care through nurturing their soft skills in the outdoors while using English. By doing so, the children come in contact with a world that helps them learn how to push through challenges and grow in curiosity of adventures unknown! I have witnessed several children at camp grow gradually from the first day to the fifth day of camp, and I want to share the story of one camper in particular.

Camper M, a seven year old girl and the youngest in the session, had come to camp for the first time this summer. She was quiet on the first day of camp, mostly sticking by her care worker and her older friends from her home. Nonetheless, it didn’t take a while for her to get adjusted to camp, as she was running around catching insects and using the target English by the second day.

Our schedules for the Olympics and Dutch oven activities, which normally occur on the third day, were switched with the stream hike activity on the fourth day due to circumstances resulting from an incoming typhoon. Camper M was absolutely stoked when she heard about the schedule change and, soon after the announcements at breakfast, invited me to her tent to help her choose the proper wardrobe for the day. 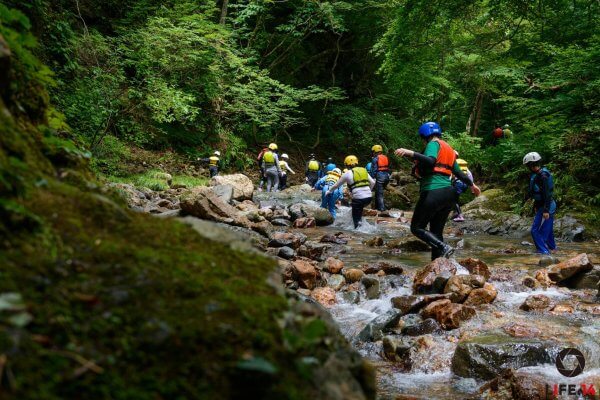 Geared up and ready, Camper M was one of the fastest and the strongest campers at the stream hike. She would dive into the deep levels of the water, pulling me in with her, while the rest of the group walked carefully on the side of the stream to avoid the freezing water. She would look around at the tall trees above her and the colorful rocks glistening from below, absolutely mesmerized by the nature surrounding her.

During lunch, she had shared with me her uncertainty to jump off the rock. Despite this, we ended up jumping off the rocks together—twice! I can’t imagine how high the cliff looked from her eye level or how chilly the water must have felt, but it was clear to me that Camper M was fearless and tenacious.

I was grateful to have witnessed her embracing these moments that allowed her natural self to flow within her. Over time, she successfully practiced the five values—Kindness, Responsibility, Respect, Courage, Leadership—and in turn she was awarded Camper of the Day. 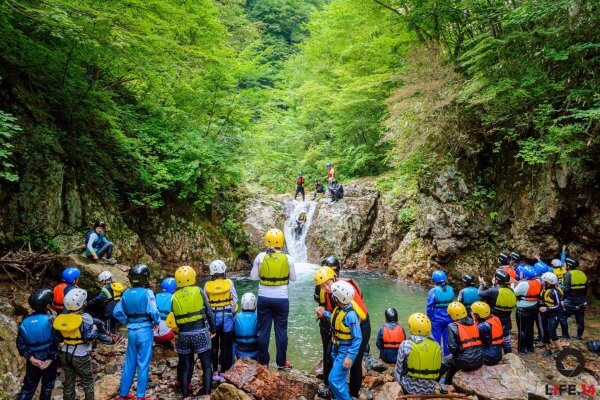 Mirai no Mori camps bring out the best in the campers through the activities done in the outdoors. Though there are many English-focused camps throughout Japan, I believe that there exists no other platform where campers who come from troubled backgrounds as such can be built up in the same way as they are at Mirai no Mori.

My desire is for the campers to take their experiences back with them into their daily lives and remember how strong, smart, and brave they truly can be, even in times of hardship. I have learned so much from my interactions with the campers, and I also hope to take back with me the different lessons I have learned during my time there. Every little touch of a camper matters for creating a unique and fun camp.

As my last remark, I would like to thank the staff, the sponsors, and the other supporting members of Mirai no Mori. Thank you for believing in the children and partnering with them through your time, effort, and donations. I look forward to meeting more partners who will join the team.

We are a team! Campers, Leaders, Everyone~ Here at Mirai no Mori!” 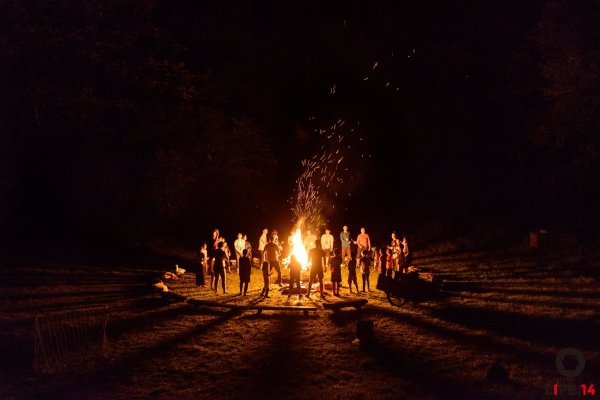